A fable or bull, scrawled at full gallop 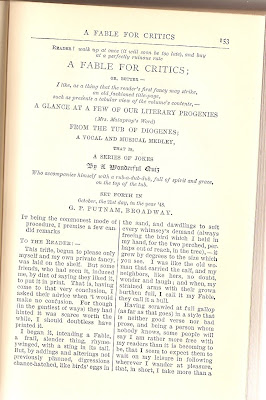 Mr. Lowell, the year before he died, edited a definitive edition of his works, known as the Riverside edition. Subsequently, his literary executor, Mr. C.E. Norton, issued a final posthumous collection, and the Cambridge edition followed, including all the poems in the Riverside edition, and the poems edited by Mr. Norton. The present Cabinet edition contains all the poems in the Cambridge edition. It is made from new plates, and for the convenience of the student the longer poems have their lines numbered, and indexes of titles and first lines are added.

Update:
In the Forum: meticulous prose, stacked like dry kindling waiting for a match.

Posted by William Michaelian at 5:42 AM