What December Said to January

Today I would like to send a special public thanks to Annie Wyndham for sharing my poem, “What December Said to January,” on this, for me, cold and quiet New Year’s Eve.

Annie: Thank you. And thanks, too, for your beautiful Salamander.

Happy New Year, one and all. Praise and thanks for your good work. You will forgive, I hope, my many shortcomings. May love erase any hurt I’ve caused.

Posted by William Michaelian at 1:18 PM No comments:

Here is a list of the books I read this year, presented in the order of their completion dates. Some are monumental multi-volume projects. I began Elbert Hubbard’s Little Journeys in the latter part of 2011. Similarly, I will likely finish with Shakespeare in January. I doubt very much, though, that he will be finished with me.

I should also note that this list would be much longer if it included books I read but didn’t finish. I browse several every day, sampling passages and pages at random, taking in chapters here and there. Just yesterday, for instance, I read the first two chapters of Pushkin’s Button, a book about the last four months of the poet’s life, leading up to the time he was killed in a duel.

And so it goes: the more I read, the more I want to read; the more crowded my library, the more books I need.

This dimly lit room full of old books
is my “parlor and workspace.”

The Gods Are A-Thirst
by Anatole France

The Vicar of Wakefield
by Oliver Goldsmith

Journal of a Tour to the Hebrides
James Boswell

A Magnificent Farce and Other Diversions of a Book Collector
by Edward A. Newton

The Life of Samuel Johnson
(three volumes)
by James Boswell

A Family
by Carl Larsson and Lennart Rudström

Thread of the Real
by Joseph Hutchison

Balzac in Slippers
by Léon Gazlan

The Satyricon
by Petronius

The Works of Rabelais
by François Rabelais

The Works of Molière
(six volumes)
by Molière

The Earth-Boat
by Joseph Hutchison

Posted by William Michaelian at 11:13 AM 5 comments: 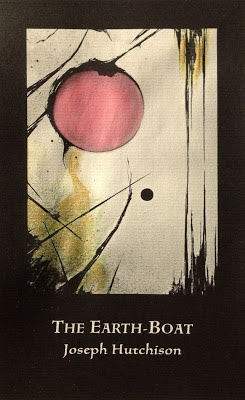 The Earth-Boat
by Joseph Hutchison


A Taste of Mexico

“The eighteen poems in this collection take an arc-like journey through western North America. Colorado, Mexico, California—regardless of place, Joseph Hutchison finds a way to commune with nature and communicate with people. These poems simultaneously describe focused moments and broad narratives in language infused with the inhabitants and sensations of each place. Crows. Comets. Mountains. Oceans. Joseph’s description of this earth-boat we all share is so engaging that ‘for a few breaths [you may] feel it drifting.’”


Words are shadows cast by meaning.
My intent? Aye, there’s the rub.

The sun is understanding:
it leaves me blind, strands me in the wood.

Posted by William Michaelian at 8:32 AM 12 comments:

As in each and every day


Today, as in each and every day, thinking, loving people know that they must respond to life by making something beautiful. Give a gift, sing a song, open a door, feed a child. Bear responsibility. Accept the fact that you had, and still do have, a hand in that which brings grief to this world. Understand, too, that you have just as much power to bring light. As a fire dies when it runs out of fuel, outrage is quickly spent. Anger is smoke. Who can breathe and see clearly when they are angry? Set your ego aside. Don’t assume superiority. Don’t claim helplessness. Don’t expect criminals to legislate on your behalf. Be your own legislator. Each and every day, make something beautiful. Your time is short. Tell the truth. Admit that you’ve been blind. Rejoice. Walk down to the graves.

Posted by William Michaelian at 9:43 AM 13 comments:


Yesterday, while revisiting “William’s Law,” I had certain pieces in mind. One is directly related to my relative silence this past year. Early on, this was noticed by some, and I was touched by their concern. I did my best to explain: that, frankly, after the release of the tenth anniversary edition of my novel, A Listening Thing, I was tired of listening to myself.

In any and every commercial light, I am the world’s worst salesman. I don’t travel, I don’t do readings, I don’t sit on panels — as, in fact, I shy away from anything in life that feels unnatural or false, to me. Let it satisfy and work for others in whatever degree; I have learned the hard way to heed that warning in my chest. As a writer working in this shallow, glib, self-centered age, I feel my responsibility ends with faithful completion of the work at hand, and telling others in my own way that the work exists. And that’s exactly what I did, with the unfortunate result that, on some days, I still felt like a beggar or a clown. But that feeling is gone now.

In the entire year that is and has been the year two thousand and twelve, two copies of my novel were sold, and one copy of The Painting of You. I’ve been quiet through it all, reading, studying, making notes. Where once a dream seemed whole, I found pieces. And they are beautiful. A handful of friends, people I’ve yet to behold in ripe and animated flesh, still stand by me. Most of the pretenders have flown — those who, for whatever barren reason, feigned interest in me and what I do — elsewhere to pose. Such are the gifts.

Not long ago, I mentioned the new revised edition of the Armenian translation of my book, The Old Language. Since the print edition was released in 2005, several later poems were added, taking the volume from about eighty pages up to 100. This online edition, so generously presented and gracefully designed by the translator, is being given a most kind reception. And so, where little effort on my part was involved, the stories and poems to which my name is signed have gained more readers in three weeks, in another language, than they did in the last year or more. Such are the gifts.

I remain full of heart and full of work. If I tell you things that make you smile or make you cringe, I do so because it is necessary if we are to move forward together. Love is strong. It does not mince words.

I’ll close for now with something Shakespeare said: All things that are, are with more spirit chased than enjoy’d.

To which I’ll add: If you would love your life, then you must embrace your pain.

Thanks again for reading.

Posted by William Michaelian at 10:21 AM 5 comments:


Grief in finding it broken, joy in the beauty of each new piece.†


There is, perhaps, no poem of mine that speaks
so simply to my own pressing need

to live by what
I preach.

Alan Semerdjian: In the Architecture of Bone


This beautiful volume arrives as part of a book exchange
with poet-musician Alan Semerdjian. 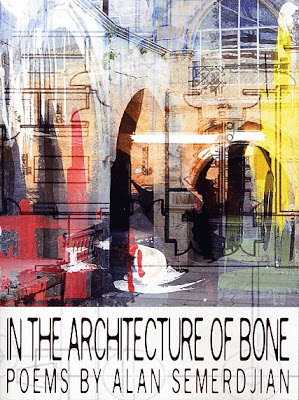 In the Architecture of Bone
Poems by Alan Semerdjian

Posted by William Michaelian at 3:29 PM No comments: